There is a lot of demand for Pokemon Let’s Go Pikachu, which launches on the Nintendo Switch this coming November 16 with gamers looking to find the best deals available for them in their country.

For those in the UK at least, we can see that there is one very good deal available for those specifically looking for the Pokemon Let’s Go Pikachu bundle which combines the Pokeball Plus accessory into one package.

Retailer Smyths appear to have the best price for this at the moment, as they are offering the bundle for £84.99 online, but with a further £5 off that price whenever you order online for collection in-store on November 16. 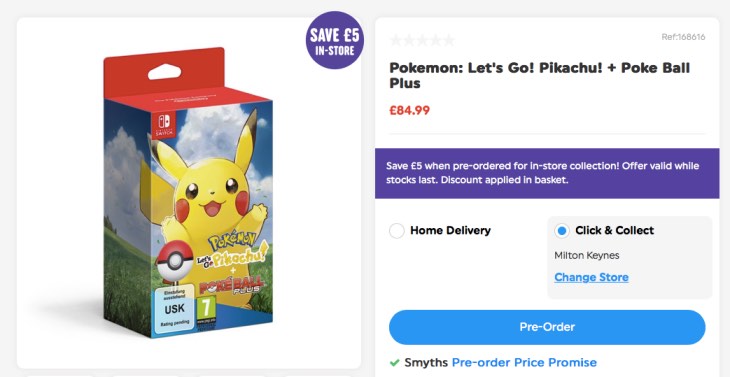 That makes it £80 as the final price you pay and you won’t find better than this elsewhere as we’ve already price checked with others such as Amazon and GAME and Smyths is still the best option.

Let’s Go Pikachu is an enhanced remake of Pokemon Yellow which was released on the Game Boy back in 1998. The Pokeball Plus accessory allows you to get into the action even more thanks to motion controls which simulate the player throwing the ball in an attempt to catch the Pokemon that you are after.

As an added incentive to getting the Pokeball Plus, Nintendo has confirmed that each accessory bought will also unlock Mew into your Let’s Go Pikachu or Eevee Pokedex which is very cool indeed.

Head to Smyths in the link above to secure your copy and let us know if you see a better price elsewhere.