We have a quick heads-up to all of our readers in the UK who are looking to pick up a new No Man’s Sky PS4 bundle. Unfortunately, it looks like there’s no specialised package with a limited edition No Man’s Sky PS4 console, but various retailers have already started offering their own deals on a range of consoles bundled with the game.

No Man’s Sky launched hours ago and will also be available on PC by the end of the week. However if you want a PS4 version with a new console, Amazon and Argos are the best places to go at the moment. 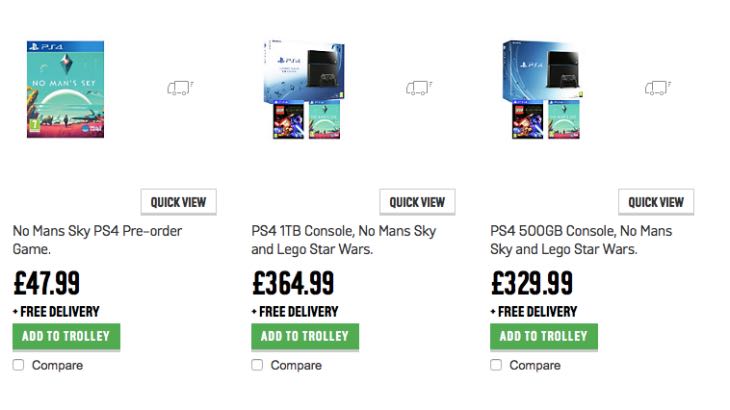 Argos offer No Man’s Sky and Lego Star Wars with a 500GB PS4 console for £329.99 with free delivery. Amazon has the same package but you’ll need to pay slightly more at £331 – however with Amazon’s price you get a free Star Wars The Force Awakened Blu-Ray thrown in.

If you prefer, you can opt for a 1TB PS4 console instead with the same games for £365, with the option of switching out Lego Star Wars for Black Ops 3.

Both are nice deals so let us know if you decide to take advantage of them.