Yesterday we learned from Online Social Media that Apple is about to reach 10 billion downloads on its App Store. This is a great achievement in a short space of time, back in April 2009 1 billion was reached, 2 billion was reached in September of that year and 3 billion in January 2010. So that means that in just over one year Apple has been able to shift 7 billion apps. 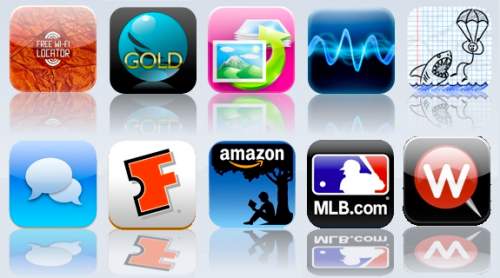 The first app that we have for you is Pirates vs. Ninjas vs. Zombies vs. Pandas and has been game of the week in over 60 countries, so expect this one to still do well in 2011. There are a number of options available to you, but who would have thought putting physics, puzzles and action in a game would make it so popular? The app itself will cost just $0.99.

The next app that we have for you on our list is Bear Grylls – Bear Essentials. This survival expert is huge in the UK, and is all set to make it big in the U.S., and what better way to do this by way of an app? Never before have we seen an app that has been intimately presented by the persons name on the app, which I have to say makes this app feel extra special. The price of this app is just $6.99.

ABBA Singbox is the first official app for the Swedish pop group and allows you to relive those special songs that are so catchy. This app gives you the chance to add even more music effects — I just feel that those who attempt to change the feel of the song will now destroy these famous songs. This app will cost you $1.99.

Our final app that we believe will be big this year is Dungeon Hunter 2, which will cost $6.99. This is said to be one of the best RPG transitions from console to iOS devcie. You have the choice to play as one player or four adventurers at the same time, which could make things a little more interesting.

There are thousands of other apps that will be developed this year, but only tens or hundreds will be truly worth being on your iPhone, so choose carefully. Watch App Store hit 10 billion downloads.