Elliptic-Labs is a company based in Oslo, they have developed a really innovative cleverly designed docking station for the iPad. The docking station allows you to use your iPad without actually touching the screen. It works in a similar way to the ‘touchless’ system of Microsoft’s Xbox 360 Kinect.

You can imagine using this in every day life. When cooking or baking and you have grubby hands, you can still use your iPad, this would be effective if you were following a recipe. The technology inside the dock uses ultrasound that looks in a specific zone for any hand movement. 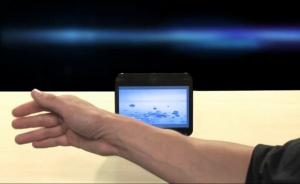 According to electronista.com the Dock isn’t quite as advanced as the Kinect, the device only recognizes a few gestures. You can see an example of it’s functionality in the video at the bottom of our article.

So far we are unaware of the price of the device but we do know that Elliptic-labs will have a stand at the CES 2011 event in Las Vegas next month.

If you want to learn a bit more about Elliptic-Labs then you can head over to their official webpage by clicking here.

What do you think of the option of gesture control for an Apple iPad? Let us know in the comments below.