Best Buy is promoting their Madden NFL 15 midnight release store openings as well today, which follows something similar from GameStop. The latter store kicks off their party from 9PM with dedicated events, although Best Buy isn’t listing such a major event and instead direct people to what they call, “August 26 Midnight Store Openings”.

The focus from Best Buy will be on making sure as many stores as possible will be open at 12:01am to sell Madden NFL 15. In most gaming store locations like GameStop, you will see hands-on time being offered with Madden 15 before the midnight release to make sure you’ve made the right choice, or to help pass the time. 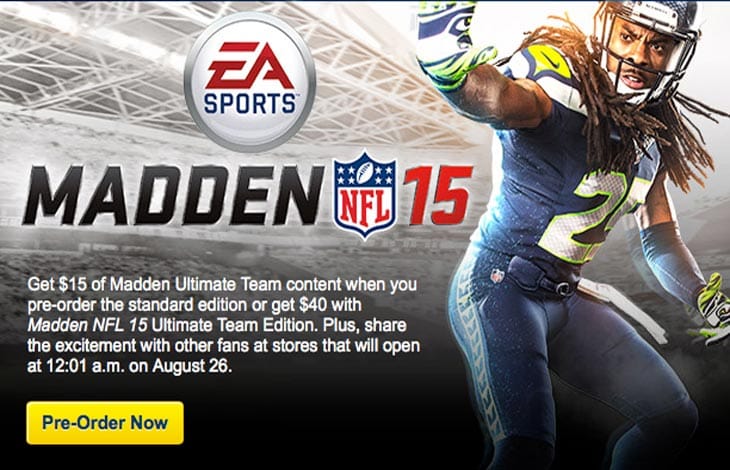 You can find out what Best Buy stores will be open for a midnight launch on their Madden 15 deals page here. You’ll find reward certificates for pre-orders, 20 percent off Madden 15 for “Unlocked Members”, and prices for Xbox One, PS4, PS3, and Xbox 360 versions. There’s also screenshots, game trailers, and full game features listed along with a link to the Madden 15 midnight release with store openings listed by state from Alabama to Wyoming.

Will you be attending Best Buy, or GameStop’s midnight release for Madden 15?