Back in February 2010 I bought the BlackBerry Bold 9700, at the time the iPhone 3GS and HTC Hero were two of the best-selling smartphones on the market, but Android was still in its early days and the iPhone 3GS was not available from my carrier of choice – so I opted for the Bold 9700.

When I got the Bold 9700 it ran OS 5.0 and this was pretty intuitive when compared to the Symbian OS-based Nokia smartphones which I had in the past, however the update to OS 6.0 really unlocked its true potential (and showed its limitations). Now that I have turned the Bold 9700 off for the last-ever time I thought I would share my top 5 apps available from BlackBerry App World.

Sometimes simple apps are the best, and that’s why I regard QuickPull 5 as one of my top 5 favorite apps for BlackBerry. This app is completely free and it allows you to reboot your BlackBerry very easily, what’s best is that you can easily schedule reboots, which is great as a restart frees up memory and clears your device’s caches – which in-turn increases performance. I schedule a restart every morning before my working day and the amount of memory it frees is noticeable.

Finding a good game for BlackBerry smartphones isn’t always easy, however one game which I have had installed since the beginning is Daily Crossword. The app is pretty self-explanatory, but what I like about it the most is the fact that each crossword is challenging and the app itself works very well with the optical trackpad sensor and QWERTY keyboard – each day a new crossword arrives, which means I tend to do a crossword each night before bed.

BlackBerry OS 5.0 and OS 6.0 both feature a pretty impressive default browser, but if you use the web more than the average user you will find it quite basic in terms of intuitively – that’s why I recommend Opera to BlackBerry users, not only does it feature web compression technology to increase page load speeds etc, but it has a great layout and the speed dial home page allows for very quick and easy navigation to your most frequently visited web sites.

I ignored the great reviews which crunchSMS received for a long time, but then I thought I would try it out and I never looked back. It gives your SMS conversations a new-look thanks to speech bubbles, but best of all when you receive a message it shows up on your home screen – which saves a lot of time and effort and allows you to quickly reply. The right-hand side of the image below shows this in more detail. 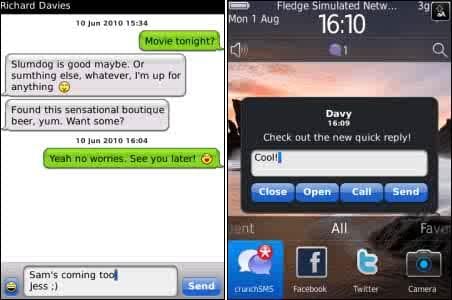 A few months ago an app showed up at BlackBerry App World which sounded too good to be true for football fans (soccer) – this is ESPN Goals and it allows you to watch highlights from English Premier League matches quickly after they happen. It works over 3G pretty quickly, but that’s because the video quality isn’t amazing, but still it is great if you want to catch up with all of the latest action from the EPL.

The above apps are my favorites, but there are some other which shouldn’t be overlooked. The early Facebook and Twitter apps were way behind similar apps for other platform, but the last few releases have brought them up to standard, that said the Bold 9700’s display size and resolution does restrict things quite massively. If you like the ESPN Goals app you should also check out the Sky Sport Football Score Centre, some other apps which I have found handy include Google Maps, Uptime, Tube Map, One Touch Flashlight, ScreenShot, Bubble Burst Free and Hotel Tycoon – all of which can be found at the BlackBerry App World.

What other apps would you like to see added to this article?