We have seen some fantastic iPhone 5 concept images throughout 2011, but now it looks like we have one of the first 2012 concept previews of Apple’s upcoming iPhone 5. This one in our opinion is arguably the best we’ve seen so far, and we have a feeling you may agree after seeing the images.

If you enjoy hearing about concept iPhone models, you may have already seen one of the most popular iPhone 5 concept models of 2011 which gave the iPhone a Nokia N9 style makeover. That design was different to say the least, although many of you felt that the design resembled Nokia’s phone too much and didn’t feature the creativity that many would like to see for the iPhone 5.

Now, we have a new set of images for you to feast your eyes on, and they come courtesy of designer Antonio De Rosa from ADR Studio. He is calling his concept design the iPhone ‘SJ’, which pays a tribute to the late Steve Jobs. As for the design, it pictures a much thinner model than the iPhone 4 and we once again see rounded edges and a metallic bezel around the edges. Rather than an aluminium back though to fit recent rumors about the iPhone 5, De Rosa has opted to keep the back case similar to the materials seen on the iPhone 4.

In terms of specs, the concept images includes hardware such as an A6 processor and an upgraded 10 megapixel camera. We’re not sure on the possibility of an even higher megapixel from the new 8mp shooter that the company added to the iPhone 4S, but the idea of a quad-core A6 processor will be a mouth-watering prospect for Apple lovers for sure.

Is this the best iPhone 5 concept you have seen so far, or do you think there are better ones out there? If so, we would like to see them so give us your thoughts on this below. This particular concept image is interesting, since after all the talk about the next iPhone having a complete design overhaul, this concept here shows what tweaks can be made to the existing iPhone 4 design, but still making it look unique individually. Would you be happy if the iPhone 5 looked like this? 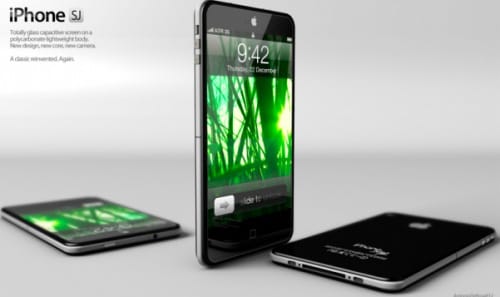