EA has just unleashed a brand new FIFA 16 gameplay trailer for GamesCom 2015. We noticed that they have already shown a glimpse of what new Liverpool FC signing Christian Benteke will look like in a Liverpool shirt.

Even better, EA has also shown the player with the new number 9 shirt, just days after it was only confirmed official by the club with Rickie Lambert having vacated the number after moving to West Brom.

Now thanks to the images that we have plucked out of the trailer, you can see what Benteke looks like in the game, both from the front and back. 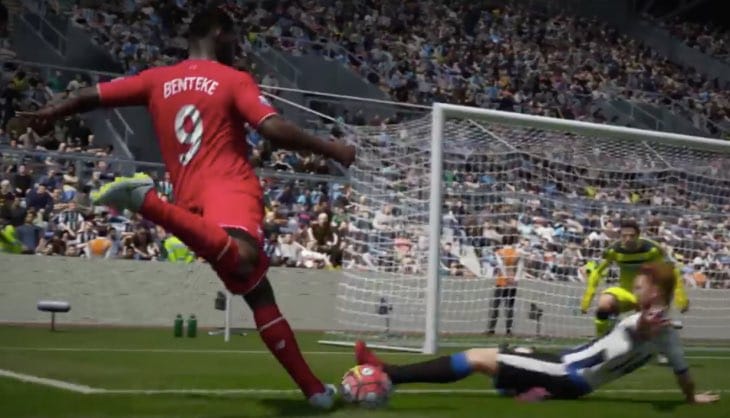 Just behind new club captain Jordan Henderson, Benteke looks amazing in terms of facial features as you can see in the shot below.

Above though confirms that he will have the number 9 shirt in the game and how good does it look like. You can see him smashing in a goal itself by watching the trailer below which is themed around the return of a brand new season for all football fans worldwide.

As a LFC fan reading this though, are you happy with how Benteke looks in FIFA 16? EA has done a great job we feel, so let us know what you think.

Henderson’s model looks great too and you can also see several other LFC players such as Lallana, Ings and Clyne behind if you look closely.