It’s been a bad day at the office for Belkin, as they have been inundated with complaints in regard to people experiencing Belkin router problems, which has caused a global Internet outage. From what we can see a huge number of people found their routers crashed today, and has led many of them vow never to purchase a Belkin router again.

The Belkin router issue seems to have been going on for several hours now and has led to the company making a statement. They have taken to Twitter to say that the relevant team is already aware of the situation and is working on coming up with a temporary workaround. They already have a few ideas for the Belkin router not working problem. 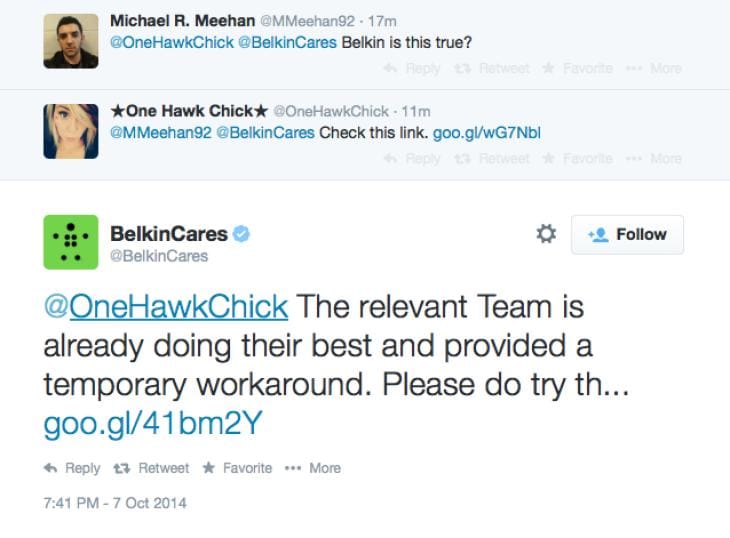 Disgruntled Belkin router owners have taken to the BelkinCares Twitter page where they have been discussing the issues and their model numbers. The team on the Twitter page has been trying to help the best they can, and from the looks of it, the issue is not going away any time soon.

One tweet from TWC said that if you are using a Belkin to go on the Internet, then you should bypass this and go direct through the modem. TWC said they just need to point out that this issue is not specific to one ISP, it is all of them.

It is tough to keep up with the tweets coming in for people asking advice, and so you should visit this page to see how Belkin is managing to stay on top of the global Internet outage.

Official statement from Belkin, “We have confirmed that the internet connectivity issue is now resolved.

If your service has not yet been restored, please unplug your router and plug it back in after waiting 1 minute. Wait 5 more minutes and the router should reconnect. If you have any further issues, please contact our support at (800) 223-5546.

We sincerely apologize for this inconvenience to our customers. We are taking a number of actions to eliminate this sort of incident from reoccurring.”