You just knew that the recent manual leak for Elder Scrolls V: Skyrim was going to bring new revelations about the game and new features that we didn’t know about yet. One such feature that hasn’t been disclosed until now is the fact that the citizens of Skyrim will now report you to the guards if they see you commiting a crime.

So the next time you think about murdering a chicken in broad daylight – make sure you do it while nobody is watching as you may find yourself paying a hefty bail out fee if a peeping tom has his or her eyes glazed upon your every move.

However, there is one interesting aspect about this new feature to Skyrim – the citizen also becomes a witness to the crime. What happens if you eliminate the witness before he or she runs their mouth to the guards? – You cunningly walk away without a ransom over your head of course. It’s a devilish new addition to the core gameplay by Bethesda and one which we think will actually tempt players into commiting more crimes than not, just so they enjoy trying to get away with it.

The standard crimes of stealing horses, picking locks, starting fights and trespassing all apply in Skyrim as they did in Oblivion, so make sure that when you participate in these kind of activities, you act alone with nobody looking over your shoulder. We can’t wait to see this in action ourselves, as we’ve had enough teasing from this manual – we just want to get playing now! 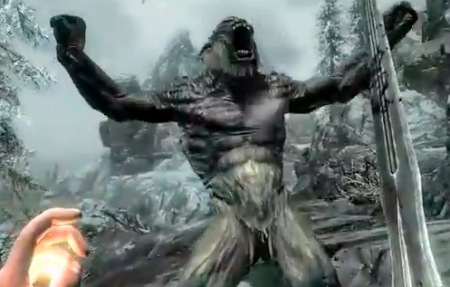 November 11 cannot come soon enough. If you have scanned through the leaked manual already, let us know what interesting discoveries you’ve made. On a side note, it’s quite interesting to see just how eager Bethesda are to see players participate within the boundaries of the dark side of the law. For example, we have players being rewarded with a trophy for escaping jail, and now this where you’ll actually lose the bounty on your head by taking out the witness that saw the crime.

We often see newpaper articles criticizing such behaviour in video games suggesting how it ‘sends a bad message’ or whatever, so are Bethesda perhaps running the risk of Skyrim coming in for a bit of negative press? You won’t see us doing that though as having played Oblivion and loving every minute of it – we’re pumped to see Bethesda add new ways to make gameplay interesting. If you want to give me a trophy for escaping jail Bethesda, then just say the word and it’s done.