There is a BBM loophole being used to download the iPhone app and this became quite evident after a number of our readers reported seeing their friends and family using BlackBerry Messenger. The chat app did appear on iTunes New Zealand for a short period before being taken down, so this enabled a few to download BBM before that action was taken.

This is obviously one loophole that seems to be working for people that want BBM on their iPhone, but haven’t downloaded it before it got pulled. It will take a very trusted friend or family member to let someone else download from their account, but this is in fact want some users are allowing. 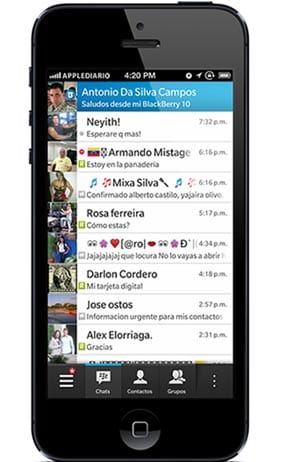 Desperation for BBM on iOS — it is fair enough asking for a friend to allow access so you can download BBM, but asking complete strangers seems like a crazy idea.

That fact hasn’t stopped a number of forums and blogs being filled with people asking for iTunes login details from people that have downloaded BBM before it was removed from the online page.

Have you seen friends and family running BBM on their iPhone, and if not would you really think others would share details so you can login?

It still amazes us how many people are asking for other people’s Apple ID and password, although we would be even more amazed if someone actually handed it out.