The BBM app will launch on iPhone and Android this month and while the exact release date is unknown, recent activity signals the download is very close to going live on both platforms. Behind the scenes there will be a lot of work going on in preparation, but making the application live is very different for BBM on iPhone and Android.

BBM for iPhone vs. Android review preparation — it is well known that an Android app can be uploaded to Google play within a couple of hours, although Apple’s review process is a lot more complicated in terms of time taken before it will be available to download.

This means that BlackBerry will need to start the manual review process on iTunes way before they push BBM live to Android. Today, we have seen BlackBerry take action on BBM for iPhone with starting the longer review process. This confirmation arrived thanks to a BlackBerry executive leaving a tweet, which you can see below. 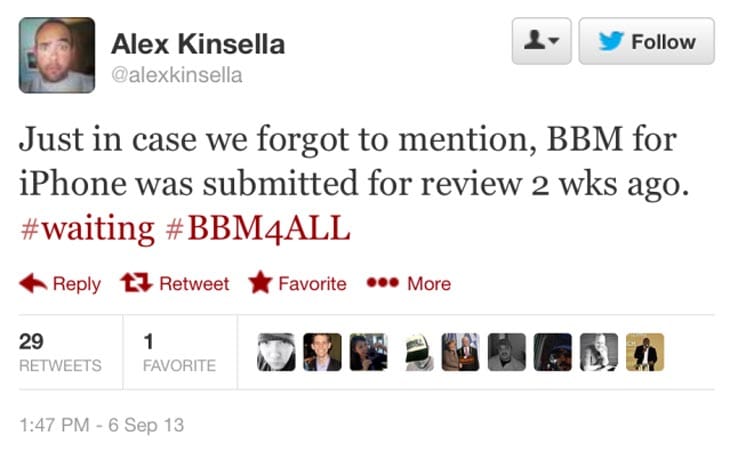 It is strange why the tweet mentions BBM for iPhone / iOS was submitted two weeks ago, considering normal app reviews take about a week on iTunes, although the delay may be due to extra checks with a chat app like this or a release date being set in the near future.

We have seen the official download go live on BlackBerry’s website by accident in the last couple of weeks and a hands-on with BBM for Android land on YouTube. These two stories are just a few signals that we are extremely close to launch; so add that to the end of summer almost upon us then you can expect a release within the next week or two.