Some bad news here today for Top Gear fans who were hoping to get their hands on a TomTom Go Live sat-nav device that features the theme of the BBC2 TV motor show as previously explained in an earlier article, as BBC Worldwide has been forced to put a halt to production due to a breach on their editorial guidelines.

Around 54,000 of the devices, which are voiced by Jeremy Clarkson, had already been manufactured, but it appears that is to be the last of them according to PC Advisor, due to an infringement on the rules of a contract which prevents the shows presenters from endorsing any type of product related to motoring, including TomTom satellite navigation systems. In order to get around this embarrassing situation, any profits which are earned from the existing devices that have already been made will now be donated to Children in Need.

Plans that had been made to allow existing TomTom sat-nav owners to download Clarkson’s voice have also now been scrapped. For those Top Gear fans who will be left disappointed, here is some of the amusing sarcastic quotes which are programmed into the themed sat-nav devices that you will be missing out on: ‘Keep left — if you’re not sure which side left is you really shouldn’t be on the road’, ‘After 700 yards, assuming this car can make it that far’ and ‘you have reached your destination, with the aid of 32 satellites and me… well done.’

The BBC were all for the production of these devices until they realized the problem, which forced them to change their minds. Due to the thought that these devices would be very popular amongst fans in the run up to Christmas, they were being rushed out, which is why so many were able to be produced before production was halted. Clarkson is reported to have had no part in the charity deal set up and will not be making any profits from the remaining devices sold.

Are you disappointed not to get your hands on one of these devices? Were you one of the lucky ones who managed to purchase one of the 54,000 already existing? 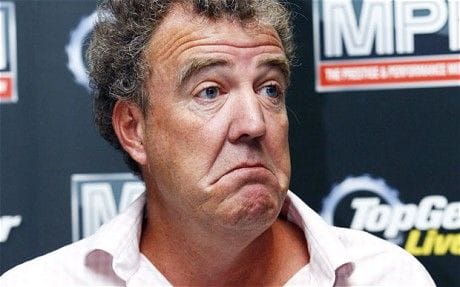