Battlefield Hardline has been available for a few days in the US, and released in parts of Europe today. However, if you live in the UK, then you will have to wait until tomorrow for its release, which is a good thing seeing as though there have been a few server issues.

You can already pre-order your copy of Battlefield Hardline from various UK retailers, although seeing as though its release is tomorrow, some of you would rather just head to your local GAME UK store, or even somewhere like Tesco, which usually offers competitive pricing.

With that in mind we thought we would have a look at the Battlefield Hardline GAME UK price compared to how much Tesco’s will be selling the game for. 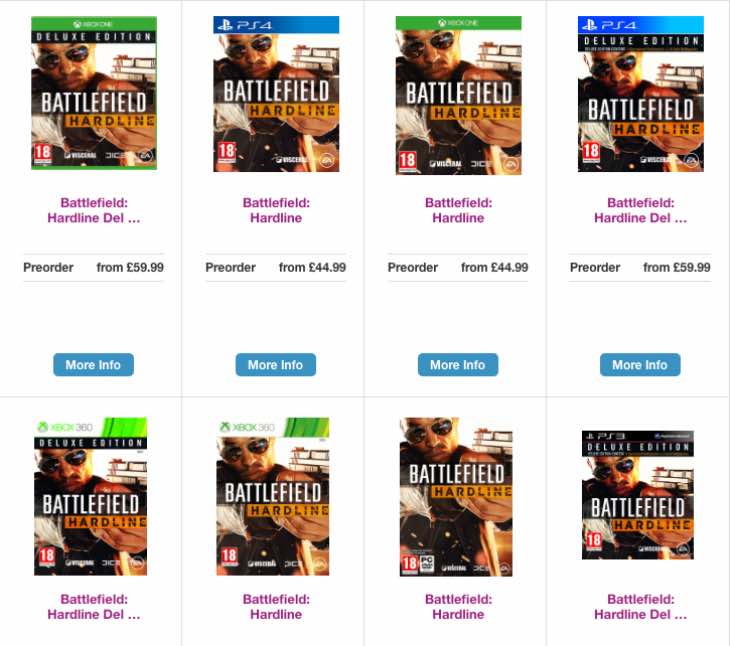 It’s worth noting that because GAME UK is a dedicated store for selling games for consoles, they have much more choice, such as special editions. First up there is the Standard Edition, which will cost you £42.99 for the PS3 and Xbox 360 and £44.99 for the PS4 and Xbox One. As for the Deluxe Edition, the prices are £54.99 for the previous generation consoles and £59.99 for the current-gen.

If you would rather the PC version, then you will pay just £39.99. There are a few other options, which you can see for yourself here.

What surprises us is how much cheaper Tesco is selling versions of this game for, as the PlayStation 3 and Xbox 360 versions costs just £36 and the PlayStation 4 and Xbox One variants will set you back £44. There are also some Battlefield Hardline bundles to look out for at Tesco as well, which you can see for yourself.

Have you already pre-ordered your copy, or will you be buying the game on the day?