The last we spoke about the beta, we told you that Visceral Games were opening it up to everyone on all platforms – meaning that you wouldn’t need a key to get in which is excellent.

Now we could have the date for you which EA hasn’t officially revealed yet. The date could be happening on Tuesday February 3 if recent rumors are to be believed. 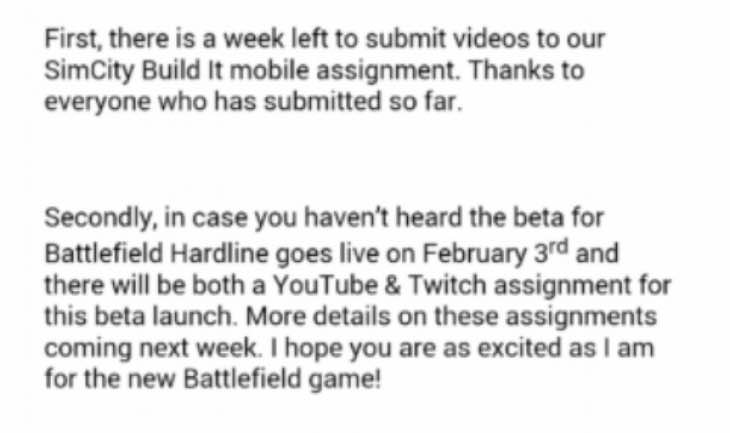 The date was apparently unveiled by Ronku, a company that is connected to EA’s sponsorship program – in other words, the team that handles the YouTube community who put hours into advertising EA’s games on their behalf.

An email sent out by Ronku apparently confirms the Feb 3 date, as you can see from the screenshot which we have extracted for you above.

It’s now become a topic of debate on places like Reddit and we have a feeling that EA may now be forced into making the date official later this week.

We always knew that the open beta would happen around one month before launch. After all, Visceral Games may still need a few days of final testing once feedback from the open beta is collected and more importantly – the servers are stress tested to their absolute limit.

Until we hear otherwise, the beta is coming next Tuesday. Let us know your thoughts on this and your expectations for the beta.

Are you pumped up for Hardline after playing BF4 to death?