Battlefield 4 Naval Strike is going to be adding four new maps to play, those being confirmed as Lost Islands, Nansha Strike, Wave Breaker, and Operation Mortar. There’s also going to be a brand new vehicle to play through, the Hovercraft which is set to come with its own unlock tier.

The Naval Strike release time has already been confirmed on PC it seems, thanks to the Origin client already giving a time when it will be available.

As far as we’re aware, the big Battlefield 4 Naval Strike release time on PC is at 10am CET, which translates to 9am in the UK, 2am Pacific Time and 5am for those on Eastern Time. 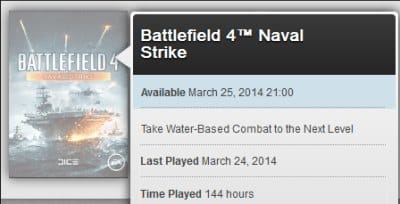 Although not confirmed, we may have Naval Strike PS4 and Xbox One release times as well. Whispers have suggested that the Battlefield 4 Naval Strike Xbox One and Xbox 360 release time is at 2pm CET, which instead converts to 1pm UK time, 6am Pacific Time and 9am Eastern Time.

Finally, those looking to play Naval Strike on PlayStation with Battlefield 4 Premium could see the Battlefield 4 PS4 and PS3 release time at 5PM UK time, 10am Pacific Time and 1pm Eastern Time – remember this has not been confirmed 100% yet.

So there we have it, this is what we know but hopefully you will all be playing Battlefield 4 much sooner. Have you heard different information for your time zone and platform?

Let us know where you are playing from and if you have already seen the Battlefield 4 Naval Strike download go live.

UPDATE: It looks like some PS4 gamers may have Naval Strike already – Is your download live too at the moment?

UPDATE 2: In case you haven’t heard yet, the PC version of Naval Strike has been delayed, sadly.