We have some surprising news and most definitely disappointing news to bring you now, as it looks like EA’s upcoming Battlefield 3 game will not be available to buy from Valve’s Steam platform, seemingly confirming that the two publishers are still at war with each other.

This move isn’t likely to go down well with PC gamers as most will just want to buy the game from the quickest and most easiest way possible, and that’s Steam since it has built a reputation for being the number one choice for buying digital copies of games online.

It’s also a very risky move by EA to take this firm stance by blocking Steam sales at the expense of consumers. Alienating customers in any shape of form is never a good idea in the gaming industry, just look at what happened when EA initially announced their Physical Warfare DLC pack – they had a mighty struggle to get back in public favor after almost making a huge mistake by not being clear enough with the content included in that pack.

It’s not the first time of course that EA has gone down this route and decided not to make big name titles available on Valve’s Steam platform. The last notable title was Crysis 2 as the game is still unavailable to buy from the store at the moment, although you’ll still find the first Crysis game so maybe EA will have a change of heart if sales from Origin prove to be below their estimates.

What are your thoughts on this personal tussle between the two juggernauts? We’re interested to see how many of you will now opt not to pick up the game from Origin as a matter of principle for EA being so stubborn. Should the company just bite the bullet and make the game available on Steam on October 25th?

For those of you who are not bothered in the slightest where to pick up the game, you can head over to EA’s Origin store here and proceed to download the PC version of Battlefield 3 if you haven’t already. The Limited Edition version of the game is available to pre-order now for $39.99, and it includes the Physical Warfare goodie pack. You’ll find the relevant price for your region as soon as you click pre-order.

What view do you take on EA’s digital distribution war with Valve? 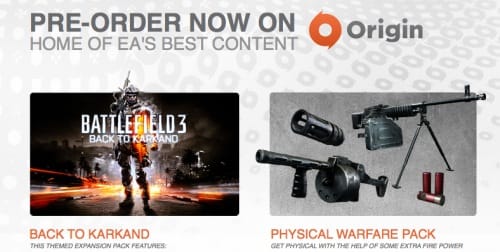