We have some exciting news for those of you looking forward to the official unveiling of Battlefield 3, as some screenshots of the game have apparently showed up in the next edition of Game Informer magazine, you definitely will want to take a look at this.

Some scans from the latest edition have been provided courtesy of PS3Blog, and presuming they are legit, it reveals that EA’s third proper installment of Battlefield will be featured in the next edition of the magazine.

There are four screenshots in total for you to drool over, but the most impressive is the last one, as it gives you an idea of the sense of realism that EA and developers DICE are aiming for with BF3. Due to the stunning visuals, you may be thinking that this screenshot has been taken from a cutscene, but you can clearly see the ammo count and compass in the bottom left and right corners of the image – very impressive. 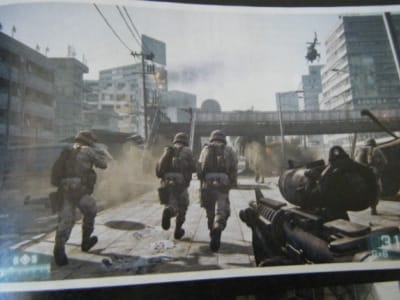 If the game turns out to look this good, then obviously it’s going to be one of the stand out games of the year – it definitely blows Call of Duty Black Ops and Modern Warfare 2 out of the water. Then again, we’ve yet to see how Modern Warfare 3 is shaping up – but EA has definitely made the world take notice judging by these shots.

What are your initial impressions of BF3? Do you think the game will be more impressive than then next CoD game?