We have been providing you with the latest updates on the imminent multiplayer beta for the highly anticipated shooter Battlefield 3, but now EA DICE has released a full list of the types of multiplayer modes available online that will ship with the disc.

In a recent post on the official Battlefield Blog, DICE confirmed that there will be five multiplayer modes available from launch, all of which should be easily recognisable for those of you who have played Bad Company 2 and other Battlefield games in the franchise.

The five modes are Team Deathmatch, Squad Deathmatch, Rush, Squad Rush and Conquest, all of which will be playable on nine multiplayer maps in the game according to DICE. Conquest may prove to be the most exciting mode in the PC version of the game, due to the fact that players will be able to enjoy a full-scale war with 64 players at the same time.

Console owners on the other hand will have to put up with a paltry 24 player cap in comparison, available for usage on the Team Deathmatch, Rush and Conquest modes. DICE also revealed that players will be given vast multiplayer type options, with ’45 distinctly different multiplayer experiences to choose between’, states the Blog. One such example of this could be the ability to turn vehicle combat off if you fancy playing without tanks and helicopters in favor of an infantry slugfest – obviously most will prefer vehicles, but it will be nice to have the option available regardless.

Full details of the five multiplayer modes featured in Battlefield 3, including descriptions of each mode can be found at the Battlefield Blog here. Are you satisfied with these five modes, or would you prefer it if there was more content available, for example a gun-game type of mode from Counter-Strike, yes from Counter-Strike since that’s where Infinity Ward stole it from – history lesson there folks. 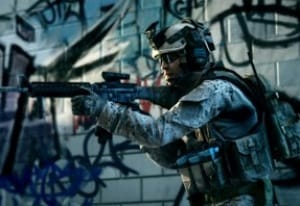