Believe it or not, it looks like DICE has finally answered some of your long requested prayers. After the disappointment over this month’s premium content, we’re pleased to report that the developer are now willing to put a healthy number of official servers back into their multiplayer mode.

If you have the game on Xbox 360 or PS3, you’ll know that this has been a massive problem over the last few months, with official servers being transformed into a multitude of custom servers running their own settings and effectively eliminating the official ones from the game.

DICE had insisted that it was still possible to find official servers in the game, but the community felt otherwise. Right now, the only servers you’ll find on console are custom ones, but it appears DICE and EA have given into the pressure and have decided to put some official servers back into the game. 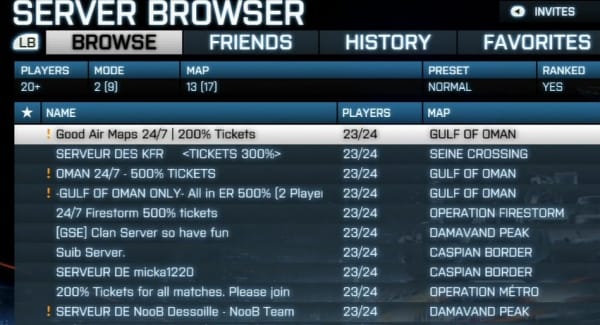 According to the Battlefield Blog, the changes have already been implemented, so it’s a good idea to head into game and see if you now spot official servers coming up in the server filter. DICE has said that they have ‘quadrupled’ the amount of official servers in the Xbox 360 and PS3 version of the game, so you should now find at least four servers available.

You’ll still need to be careful when jumping into a quick game though, as it is very likely that you will still be put into a ranked custom server despite the change. No longer will you now have to put up with being kicked from a server for ‘being too good’, while those of you who just want the vanilla map rotation and ticket numbers should be delighted with the change as well.

There’s a lot of issues still ongoing with Battlefield 3, but let’s hope this positive action by DICE will be the first of others to come. If you are not a fan of custom servers on console, let us know your thoughts on DICE ‘quadrupling’ official server support.

What updates would you like to see next more importantly?