Remember the planned 12 minute Battlefield 3 gameplay trailer that EA were planning to reveal on April 17th? Well it turns out that gamers have a chance to watch it early, by joining forces on EA’s Battlefield 3 Facebook page – interested?

In a clever move by the company, they are requesting fans to ‘like’ their newly set up Battlefield 3 Facebook page. As soon as the number of fans reaches 1,000,000 the 12 minute gameplay trailer, complete with producer commentary will be unlocked for fans to see.

At the moment, the counter has just past half way, with over 551,000 likes so far. At this rate, we imagine the 1,000,000 target will be reached within a few hours, so perhaps during the early morning for those of you in the US. Some of you may be upset that EA are resorting to such tactics for the trailer, but we say it’s a pretty fun way to unlock it, don’t forget this is the chance to watch it early! 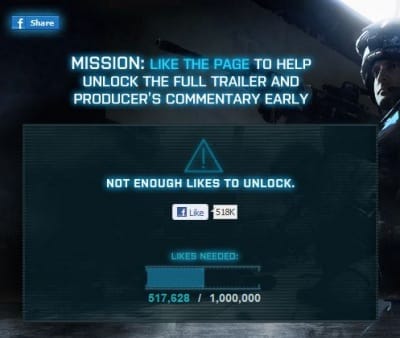 Have you clicked ‘like’ on the Battlefield 3 Facebook page yet? If not, make sure you visit this page to do it immediately – we have already casted our vote so we’re counting on you guys to do the rest. We have a feeling this trailer is going to be pretty epic – we can’t wait.