Things have just got a whole lot more interesting for PC owners with early access to the Battlefield 3 beta. Previously, only one map was available in the beta, that being Operation Metro, but it has been confirmed that a second map, Caspian Border is available to unlock for those who have knowledge of the server password.

This really is the map to play as well, as Caspian Border will allow up to 32 players per team during Conquest mode on the ‘secret’ map, giving a possible player total of 64 players on the map at once – mindblowing stuff.

As you may have realised, this is a big deal for Battlefield 3 players, as DICE seemingly had no intention of making Caspian Border playable during the beta, even listing on their beta website that the map was for back-end internal tests only. However, the password was leaked out yesterday on forums online, giving players the opportunity to get a brief glimpse of the map, more importantly – a first play using some of the awesome vehicles available, compared to Operation Metro.

As for the all-important password. Originally, Caspian Border could be accessed with the password ‘sexyelevator’, but as most of you may know this has now been changed to a different password. We’ve done some digging and found that the new password currently is ‘Appletini’, and we’ve also heard that ‘Rumncoke’ works as well.

The open beta releases within the next 24 hours for all Battlefield 3 players remember, but if you are desperate to get in on some secret hands-on time with Caspian Border, try out the passwords above and let us know if you have any joy. If we find out that the password has been changed again, we’ll update this and be sure to let you know. Don’t forget that the map only supports 64 players at a time and there are only a few servers running Caspian Border, so the chances of getting in are very slim. Good luck guys. 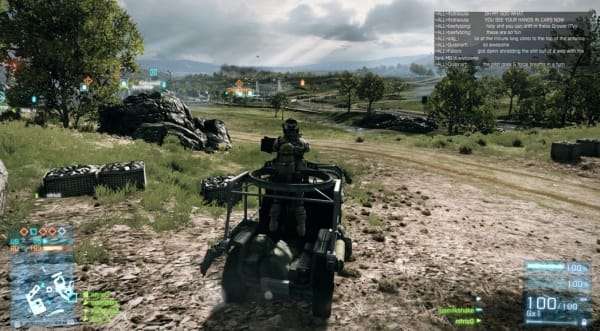