Earlier on we gave you an example of how the graphics differ between the Xbox 360 version of Battlefield 3, depending on if you have the optional HD texture pack installed on the console or not. Now we have a confirmation of how much space the pack is going to take up on your HDD.

We’re pleased to say that it is good news. According to an image posted online from a user who seemingly has an early copy of the game, it has been reported everywhere that the install size for the HD pack is just 1.5GB.

Considering that DICE stated that this optional install will come on a separate DVD disc on Xbox 360, we’re very surprised at the install coming in at just 1.5GB – we expected this to be much higher.

Having said that, it’s great for those of you who have almost maxed out your HDD and were expecting a huge install size too. Everyone should have no problems fitting an extra 1.5GB on the disc, and judging by the quality of the screenshots here, it looks like a win win situation for Xbox 360 owners. 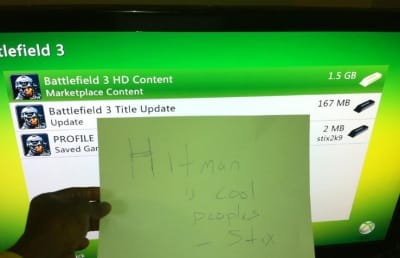 Interestingly, the screenshot showing the size also reveals that Battlefield 3 has an instant title update ready to install at launch. The game doesn’t release until Friday of course, but we bet there’s a few thousand who have already started to rank up on EA’s servers – we’re very jealous obviously.

DICE initially said that the update would be available on a separate disc compared to the PS3 version shipping on one Blu-Ray, so we’re a bit confused as to why this is showing as Marketplace content – perhaps DICE will clear that up for us this week before the game goes live.

Are you surprised that the HD texture pack is just 1.5GB in size only? We have to admit, we were expecting something like 10GB or similar, given the big fuss made about the optional install. Give us your thoughts on this.