While owners of Battlefield 3 have just been treated to a patch and look to what the next update will bring, we have some good news for fans of the game. Today we can tell you that Battlefield 3 for iOS devices arrives with the Aftershock release.

The game has been launched by EA for the US App Store, and will offer fans a first person shooter game and the chance to enjoy online multiplayer gaming for free. But as Cult of Mac is reporting it’s not the game everyone was hoping to see.

For starters there is only one map on offer with only five different weapons to pick from, with one of them needing unlocking. The game seems like it is a promotional release for Act of Valor instead of a complete game, and also only gives users a very short taste of online gaming.

There are not any attempts to try and get users to make loads of in-app purchases though, but will leave some Battlefield 3 fans disappointed. When news of the app first came to light last year many were expecting a nice campaign with plenty of multiplayer game modes, and be a direct sequel to Battlefield 2 for iOS.

The game does have some nice graphics and a good control system, but the rest of it leaves you feeling a little deflated. It will also often frustrate you as well as it can take ages to find a game, and even when you finally do you will either get kicked out before or just after you start playing.

But if you are lucky and manage to stay in the game you will soon become annoyed by the lag. Many of these problems are occurring because the game is new, and will probably get sorted in the coming days. There is a great level of potential with the game and the control system is great, which as many fans of this type of game know, is very important.

It also has to be remembered the game is free but users who have already downloaded the title have complained about the connection issue. Battlefield 3 Aftershock is available on the US App Store as a free download. iPad, iPhone 3GS or later, and iPod Touch 3G or later required.

Have you downloaded Battlefield 3 Aftershock yet? What do you think of it? 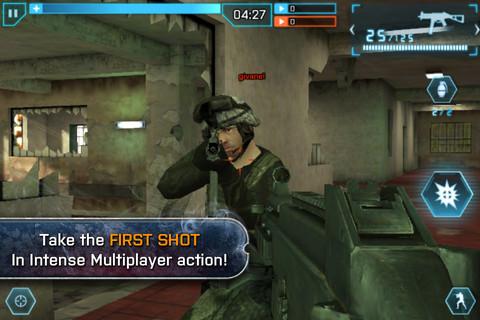