As you are aware the Product-Reviews team attended this year’s EuroGamer Expo yesterday and got our hands on some of this year’s biggest upcoming titles, one of which was Battlefield 3 and despite being impressed we couldn’t help but feel a little disappointed.

We played the PC and PS3 versions of BF3 and probably racked up approximately 2 hours of hands on time with EA DICE’s Modern Warfare 3 rival – however during our time with the game we never experienced any environments which were destructible, this surprised us as such features have been touted by many as major Battlefield 3 selling points. The top-end PC hardware which we played BF3 on was undoubtedly DX11 compliant, and it is DirectX 11 which is said to give the PC version of Battlefield 3 its destruction – but despite this we never saw explosives blow holes in the side of buildings etc. Could it be that the PC version we played at EuroGamer was not DX11? None of the staff we spoke to could answer this question. 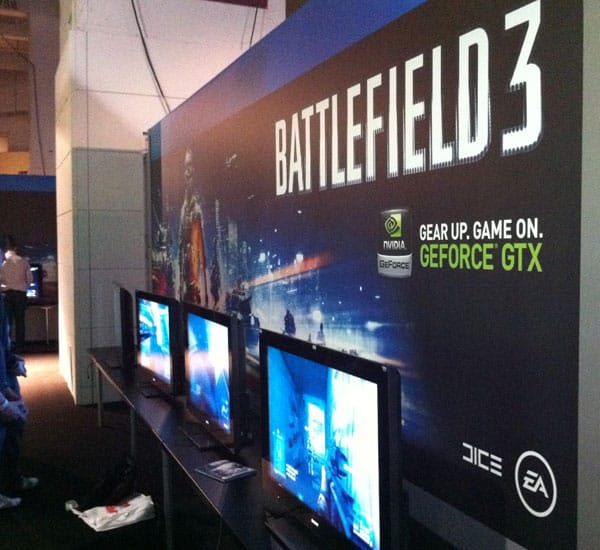 If you check out our previous Battlefield 3 destruction article you will see that BF3’s destruction looks great, however when we shot at trees and buildings there was no major affect – also we didn’t managed to demolish any walls with explosives or RPGs – perhaps the walls we went for were indestructible – your guess is as good as ours (if you attended EuroGamer and managed to blow up a wall let us know in the comments section at the bottom of this page).

With the Battlefield 3 beta kicking off next week and two more days of the expo to go perhaps the level of destruction in Battelfield 3 will become more apparent soon, one thing which is for sure is that the game at the show was pretty good, however if you thought all map features would feature some level of destruction you will be disappointed.

Have you played a pre-release version of Battlefield 3? If so, were you quite unimpressed by its destructive environments?