If you have been playing the recently released Battlefield 3 beta religiously, you may have forgotten all about the Back to Karkand bonus DLC content that will be releasing alongside the game for those who have pre-ordered the limited edition of Battlefield 3.

For those of you who are unaware of what Back to Karkand is, it will be a map pack that will bring remastered versions of four maps to Battlefield 3, maps that were famous on Battlefield 2 which old school gamers should remember.

The maps have already been revealed as Wake Island, Strike at Karkand, Gulf of Oman and Sharqi Peninsula, but so far no details have been disclosed on the type of weapons that will be included in the pack – until now that is.

One clever user has managed to locate and disect files that were hidden inside the Battlefield 3 beta to list the types of weapons that should be included in the Back To Karkand DLC pack. You’ll be pleased to know that it is quite a vast list and such weapons include the FAMAS, the L85 rifle, the MG36, the Jackhammer, the L96 sniple rifle and many more.

You can check out the full list of weapons and other useful information courtesy of forum user Morgan over at the Battlefield3Online boards. We have a feeling that many of you will be pleased that the L96 and L85 weapons are available, while weapons such as the FAMAS should be familiar with all of you.

We’ve also located weapon pictures of each gun that will be featured in the pack, you can check those out here courtesy of MP1ST. If you have pre-ordered the limited edition version of the game and reserved your access into Back to Karkand, let us know your opinions on the weapons that will be included. 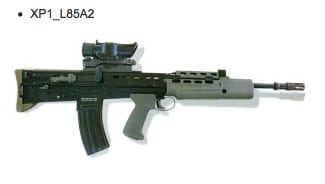 Are there any guns that you think are missing off the list?