Less than an hour ago we told you that early access to the Battlefield 3 beta was live and we showed you how to redeem access via Xbox Live, well we thought we would try out the beta and there seems to be a major problems with it.

We started up the beta and everytime we attempt to find a multiplayer game it seems to be about to join until we receive an error message which reads “The Connection with EA Online was lost”, you can see an image showing the exact error below. We have restarted our router and turned the 360 off and back on – but still this error stops us from getting anywhere. 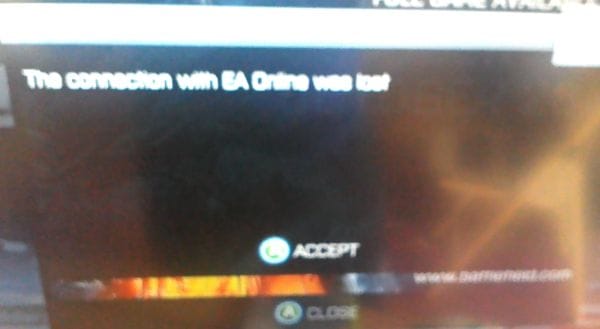 We had a little look on Twitter to see if this was a common problem and we are not alone, searching the terms ‘beta ea online’ shows lots of complaints about the problem, we’re not sure if this is a problem with the Xbox 360 version or all platforms – therefore we would love some feedback from you.

Below we have embedded a video which shows the problem occuring twice (out of two attempts), we have now tried over a dozen times to no avail – so it looks like EA DICE has quite a major problem at their hands, that said this is what beta testing is all about and these sort of problems help developers fix things before the game’s proper release.

Feel free to share any other problems you experience in the comments section below, we will do our utmost to keep you up-to-date with any news we hear regarding the matter.