Have you had enough of Armored Kill yet? If you are sick to death of getting killed everytime you step into a mobile artillery, you’ll probably be glad to hear that DICE has now started to reveal details of the next DLC expansion Aftermath which will be available at the end of November for PS3 Premium members.

While many Battlefield 3 fans haven’t been too impressed with what Back to Karkand, Close Quarters and Armored Kill has offered, we have to say that we’ve loved every expansion released so far and can’t wait to get our hands on Aftermath at the end of next month.

Aftermath is going to include another four multiplayer maps and we can reveal to you that they’ll be called Epicenter, Markaz Monolith, Saadi Palace and Telemarket. There won’t be a huge focus on vehicle based gameplay like Armored Kill, but there will be three new vehicles to try out: the Phoenix, the Rhino and the Barsuk. 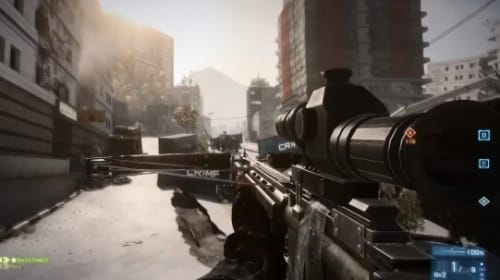 As with each release, there will be brand new assignments to work through and this time instead of unlocking vehicle items, you’ll be back unlocking new weapons to use, one of which has already been confirmed as the crossbow. Fans have been praying for a crossbow weapon to be added for a long time and not for the first time, DICE has answered those prayers by adding it into the game and hopefully into all of the base maps and modes as well.

Aftermath is not due out until November 27 for PS3 Premiums and December 4th for Xbox 360 Premiums, but we have two excellent gameplay teasers to give you a general feel of the new gameplay environment after Armored Kill. The first is the premiere trailer, but the second is a nice insight from producer Craig Mcleod mixed in with unseen gameplay footage and a few lovely crossbow kills.

What are your general impressions of Aftermath after playing Alborz Mountains, Bandar Desert, Death Valley and Armored Shield for so long? Are you happy that the focus has gone back to urban maps? We can’t wait for this to drop – stay tuned to PR for further Aftermath updates as we get them.