After the recent unveiling of both Battlefield 1 from DICE and Infinite Warfare from Infinity Ward, we wanted to gather your feelings on both games and find out which game you are planning to buy and play the most.

Battlefield 1 has a release date set for October 21, while the next Call of Duty game will as usual launch in the first week of November on November 4.

It has been over a week since both games were announced, but already we can see that there appears to be a big divide over the two.

We’re specifically talking about the shock amount of dislikes that the Infinite Warfare trailer has been receiving on YouTube. 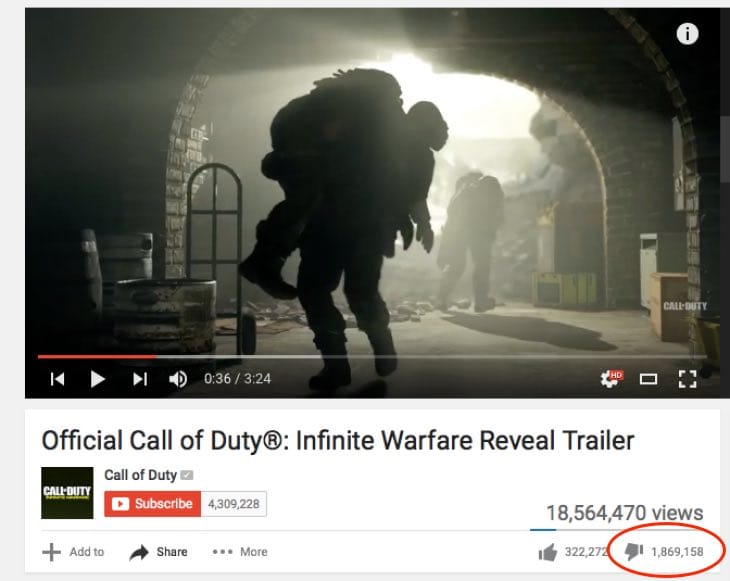 At the time of writing, the trailer has 1.84 million dislikes if you can believe that – significantly higher than the amount of likes which just stands at over 320,000.

In comparison, the first Battlefield 1 trailer has almost 1.4 million likes compared to 25,000 dislikes so based on social media interaction it is clear what game fans are taking a preference to.

Is this going to be an indication on the sales results though? That is the most important factor after all, as many users may simply be just jumping on the dislike bandwagon because they think it’s ‘cool’ or passes off as internet ‘banter’.

Give us your input on this as we want to know what the gamers really think. Are you shocked with the amount of dislikes for Infinite Warfare on YouTube – will you still buy it or is your money going on Battlefield 1?