Update: We can confirm that a new BF1 1.10 update has just gone live on all platforms as of June 20, 2017!. This is the Battlefield 1 Nivelle Nights patch, so skip to the bottom of this article for details on the BF1 1.10 patch notes as soon as DICE release them.

Original article: This is the page where you can come to check all of the latest Battlefield 1 update version history across all platforms. The next scheduled Battlefield 1 update should be version 1.10 for the June BF1 update on PS4 and Xbox One after DICE already released BF1 1.09 in May with the May 2017 update.

We’ll do our best to post any Battlefield 1 patch notes when DICE release them so you can keep checking back at this page whenever you see a new BF1 update on PS4, Xbox One or PC today or Title Update and let us know in the discussion section.

For those that have been playing from Day One, what would you say is the biggest priority that DICE needs to fix before anything else in the next BF1 update? 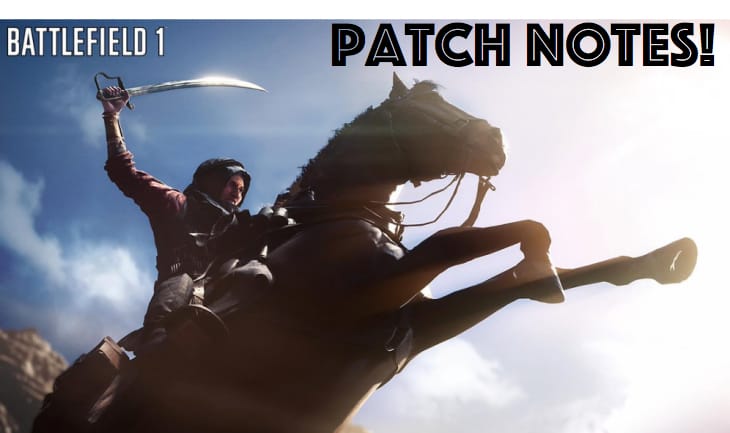 Battlefield 1 features amazing intense and unscripted gameplay at all times, but with this it often means that there are going to be plenty of bugs for DICE to fix after launch – that’s of course you can play frequently given that there has been lots of Battlefield 1 server maintenance and suspected DDOS attacks against EA.

Let us know your Battlefield 1 feature wishlist after launch and come back here for the next batch of BF1 1.10 patch notes for PS4, Xbox One and PC soon.

Patch notes are usually delivered to the official forums several hours after going live, hang on tight and we’ll deliver them here for you asap.

Update: A new BF1 patch is now available to download, and as a result there should be BF1 server maintenance on all platforms for two hours to get ready for the patch. As usual, DICE isn’t posting patch notes until maintenance is done, but the BF1 1.10 patch notes for PS4, Xbox One and PC will be available here so keep checking that link.

Any problems installing the new update? Let us know in the discussion section below.