It has been a long time waiting but we are finally pleased to report that a new Batman Arkham Knight PC patch for September 3 is available to download.

There was initially some confusion after this patch appeared early for beta testers on Steam. That patch was then removed but now the official version is available for all PC owners of the game.

Remember that this is the emergency Batman Arkham Knight September update that has been worked on by Rocksteady – developers of the console version who had to step in after Iron Galaxy Studios failed to live up to expectations on the PC port. 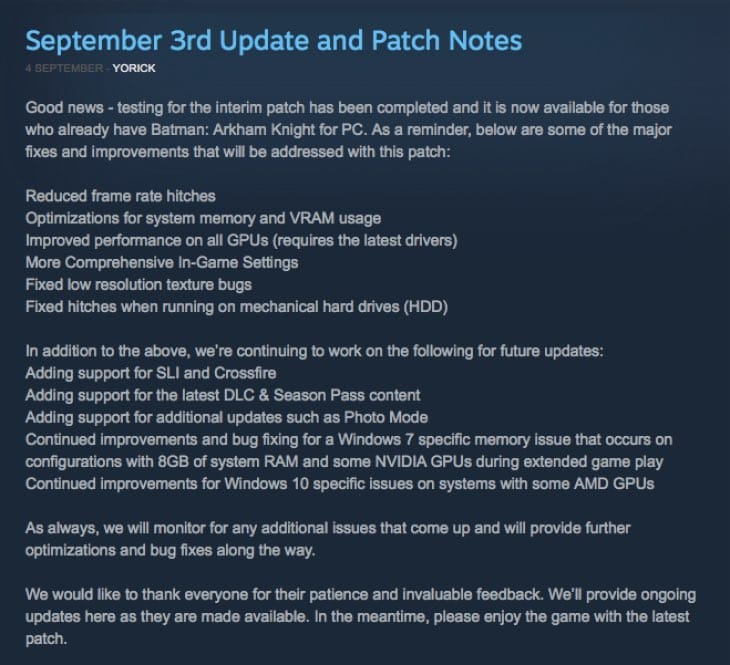 Above are the full patch notes for Arkham Knight today, with pleasing reports from the community that these changes from Rocksteady have fixed up the initial problems which led to the cancellation of PC retail sales.

While those sales are still on hold until further notice, it looks like everyone will be happy with this update. Rocksteady has improved performance on all GPUs, fixed low resolution texture bugs and provided optimizations for system memory and VRAM usage as some of the key changes.

Perhaps more importantly, Rocksteady are already at work on a new Batman Arkham Knight update for PC which will come out at a later date – targeted areas are highlighted above.

For those that have just installed this update, please give us your new experiences with the same below. Is everything now running smoothly for you or not?