While the console version of Batman Arkham Knight has been getting amazing reviews, unfortunately it looks like the same cannot be said for the PC version of the game which is suffering from some serious performance issues.

Those with a PC copy of the game have been venting their fury on message boards such as Reddit, but also the Steam page for the game where countless negative Arkham Knight PC reviews are now overtaking the entire page. 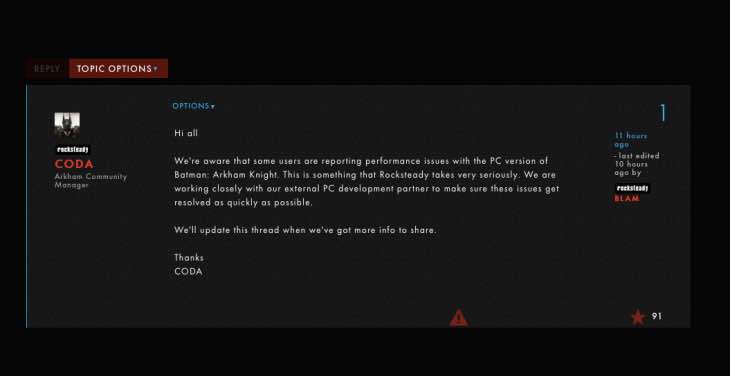 In light of the barrage of criticism, Rocksteady’s Community Manager Coda has now released the above statement on the game’s official forums promising that they will investigate the issues.

As a result, expect a Batman Arkham Knight PC update very soon as it’s clear that Rocksteady need to step in and make some improvements so that PC gamers are happy with their launch purchase.

Is this an overreaction or is the PC version of the game really that bad? If you bought a PC copy, let us know your problems below.