As some you may already know, the hotly anticipated action adventure game, Batman: Arkham City is now available for pre-order in various stores. The sequel to the former game of the year Batman: Arkham Asylum promises to be even better than its predecessor and we have already been shown many screenshots, trailers and details which reveal just enough to know what to expect from the game.

Today we have news of the various bonus costumes and skins that players receive when purchasing the different retailer-exclusive pre-order packages. From the article at the ArkhamCity website, the fans have managed to compile a list of the six choices of attire available and where and how to get your hands on them.

Among the six costumes is the classic 1970s grey and blue outfit from the hit TV series Batman. This can be obtained when a pre-order is made in the US at Toys ‘R’ Us and in the UK at ShopTo. Another awesome skin is the Batman Beyond from the animated TV series, which is seemingly an all-in-one black cape-less outfit which covers the whole face leaving just the eyes and has a red Batman logo across the chest. This can be obtained from MightyApe in New Zealand and GameStop in the UK.

There is also a skin from The Dark Knight Returns, which features a much larger Batman apparently based on the post-retirement character which features in the graphic novels by Frank Miller. It can be obtained with the purchase of the Collector’s Edition from all participating stores. A skin from The Animated Series and the Earth One skin, which are also available from MightyApe, complete the wardrobe of bonus costumes.

There have also been reports that there will be a bonus Red Robin skin, available for the Robin character when the game is bought at JB Hifi in Australia and Best Buy in the US. Which costume will you be hoping to get your hands on? 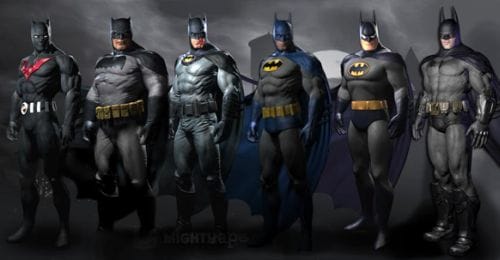