We have some interesting news to bring you now, as a new video for Batman: Arkham City has been released somewhat prematurely onto the internet, and reveals the possibility of co-op play within the upcoming game.

As reported from Eurogamer, the video has surfaced over at French website Jeux Video, and it definitely hasn’t been released officially by Warner Bros.

What we see in the video is an unlikely combination between Batman and The Joker, who fend off a series of street thugs together, suggesting that a co-op mode may be a new addition to Arkham City, which is due out sometime this year for the Xbox 360, PS3 and PC platforms.

The video has quickly made it’s way onto all major gaming websites and there is talk that it could be a fake – i.e the result of a highly skilled fan video, taking the audio and other animations from Arkham Asylum and other sources. We’re not too sure either. 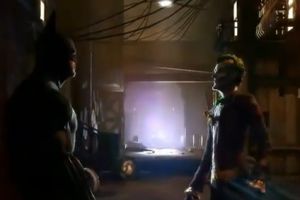 Take a look for yourself and let us know your thoughts on it. Do you think it is real or fake? Obviously the idea of a co-op mode in Arkham City is great though. Whatever happens, it’s going to get the attention of Warner Bros.