Rocksteady Studios has gone all out with the launch of their latest title, Batman: Arkham City, with various bonus offerings being made available with the pre-order packages. We previously brought our readers news of the different skins and costumes that can be obtained depending on what country and which store the order was made in.

Today we have news of the varying steelbook edition cases that are on offer. According to ArkhamCity.co.uk each special edition case appears to be dedicated to an individual villain. Though the price of these bonus cases will cost gamers slightly more than if they were to buy the game with the standard cases, there doesn’t seem to be any difference in content just simply the case. Reports also suggest that there are more steelbook edition cases to come.

The versions of special cases on offer at the moment are the Joker edition, which can be purchased at EBGames in Australia and there is also a Two-Face edition on offer at ShopTo.net in the UK. Each features the villain’s face on the back cover of the hardened case with Batman on the front. Though we have not got a price for the Joker edition, the Two-Face edition is being listed £39.85, that’s £2 pounds more than the game would cost with a standard case. 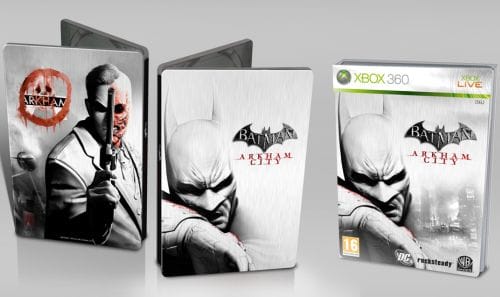 The Joker steelbook edition being offered by EBGames actually comes with a whole package of other content including a DVD of Batman: Under the Red Hood, the Joker Carnival Challenge Map and the 1970s Batman skin which featured in the hit TV series, while the Two-Face edition appears to come with no extra material other than the steel casing. This suggests that the offer in Australia will cost more than the UK offerings.

What do you think of the special edition cases? Would you pay more just to get the steelbook casing with your game? 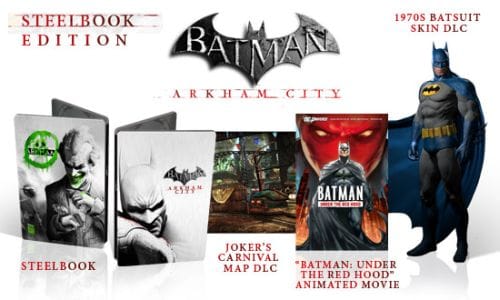