We have some good news for those of you who are planning to pick up Batman Arkham City later on in October, as Warner Bros has just released the official box art for the game, and it’s very much different to previous images that were rumored to had been chosen for the box art.

Warner Bros had earlier released a previous image of the box art for Batman Arkham City, but it appears that they have now had a change of heart and gone with a completely different design. Compared to the front view of Batman posing in a fighting style looking straight on, the new box art image now features Batman at a side-on view holding on to a building statue with Wayne Enterprises visible in the background.

We definitely prefer this new look box art image compared to the old one, and we’re glad that the black-white color theme has been retained as well as it really adds to the whole dark and mysterious ‘aura’ that’s now associated with the Batman video game reboot following on from the excellent Arkham Asylum game.

The game will feature pretty much everyone you know and love from the Batman franchise, that includes the return of the Joker and Poison Ivy from Arkham Asylum, while you’ll also see appearances by The Riddler, Penguin, Catwoman as a playable character and even Robin as a playable bonus character in the challenge maps included in the game.

If the game turns out to be as good as Arkham Asylum, then it’s going to be one to look out for at the end of the year, and also a perfect game to play when you need a break from the likes of Battlefield 3 and Modern Warfare 3 which are also both due out towards the end of the year. It’s probably too early to tell whether this will turn out to be a candidate for G.O.T.Y like it’s predecessor, but we’re hoping that the first solid gameplay for the game won’t disappoint as there’s a lot of expectation riding on the sequel.

Are you looking forward to picking up Arkham City in October? Let us know your thoughts on the new box art for the game. Is it better than the previous one released by Warner Bros or not? We’ve provided the image for you below, courtesy of VG247 so you can see what it looks like for yourself. 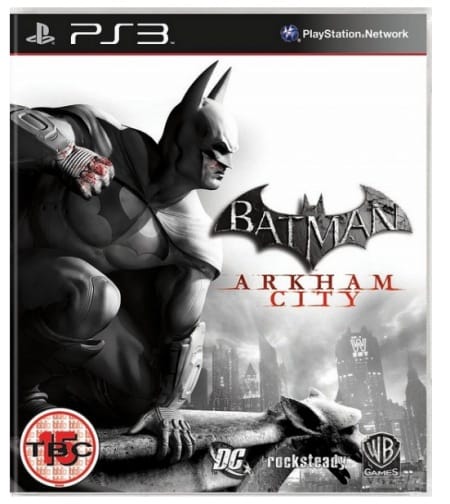