Most of you will know by now that Robin will be a playable character to feature in the upcoming title Batman: Arkham City. Rumors originally began to circulate that the character would be making an appearance, before then being confirmed that he will indeed be made available through a DLC pack where players can use the Dark Knight’s sidekick in challenge modes.

Today we have news from the Arkham City site, that not only will players be able to take the role of Robin, but like Batman, he will also have a variety of skins that he will appear in too. This bonus attire includes three skins altogether which are hooded Robin, thought to be the original costume for the game, Robin from The Animated Series and Red Robin. All of these costumes can be seen in the picture below.

We already know that Rocksteady Studios’ aim is to portray Robin in a completely different way from what we are used to seeing when it comes to the character’s personality and judging from what we know so far they have certainly succeeded. He is a lot more ‘bad ass’ than we’re used to and will have abilities almost as powerful as Batman’s.

In an interview with PlayStation.Blog, it was also revealed that the character will be wielding a shield as well as the bo-staff he has been seen pictured with. He will be hard hitting in the challenge maps and will also be an expert with explosives. Gadgets such as augmented vision will equip the character aiding him in identifying these explosives amidst the environment. Little else is known about the shield itself but I’m sure we will be hearing about it before the release of the game come October, and when we do we will be sure to bring you the details.

What do you think of the new look Robin and his other skins? 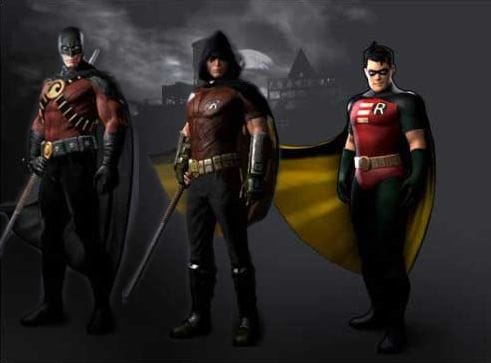