The excitement is getting harder to contain as the build to Batman: Arkham City, one of the most anticipated titles that will launch this year, gets more substantial. We recently brought you news of the bonus costumes and skins available when pre-ordering the game from varying stores and today we have some details about the game that were revealed by PLAY magazine.

The news comes from the September edition of the magazine and heightens the anticipation for the title which releases this October. Amongst the new details are apparently some interesting new screenshots. Of course we are unable to release these screens but you can check them out for yourself by purchasing the magazine as soon as you can.

The details we have which were revealed buy the magazine are also brief so as to avoid spoiling the surprise for those who will be purchasing the PLAY mag. Most of the fresh information concerns the new Detective Mode which features in Arkham City. It has apparently improved from the previous Batman title, Arkham Asylum.

For those that are unfamiliar with this mode, it’s a surveillance system which Batman is able to access through his inventory that allows him to eavesdrop on enemies and discover who is armed and unarmed etc. Dax Ginn explains that in the new title certain enemies will carry jammers that disable the Detective Mode, forcing players to identify them and take them out first before being able to use the function again. Getting attacked while using Detective Mode also deactivates it.

Limited vision and lack of compass when in Detective Mode also forces players not to use it all the time, making the game more of a challenge. Throughout the game are subtle hints and clues that help players progress. PLAY revealed that when entering Crime Alley in Arkham City for example, a button prompt lets Batman pay respects to his parents when pressed.

The magazine, which is available in stores now, also reveals Catwoman has a similar mode of her own called Thief Vision, which when activated, emphasizes enemies in a bright white and illuminates the city in an orange glow. Dax Ginn also has announced that the full character roster has not yet been revealed. Check out the link above to find out what else was revealed in the magazine.

What do you think of the details that have been revealed about Batman: Arkham City so far? 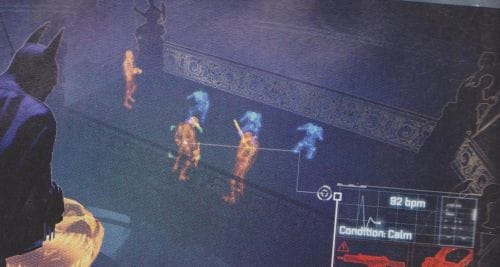