In a previous article we brought you on Batman: Arkham City, we mentioned a few new characters that would be added to the roster of the many that are set to feature in the upcoming title. One of those characters was Solomon Grundy, a huge beast of an undead man, certainly a villain that will prove to be more than just a handful for Batman to handle.

Rocksteady have been kind enough to us so far when it comes to releasing new and interesting details about the game, which does not ship until October 18th. Today we have news of some fine concept art that they have released, which features the Victorian zombie monster chained up in his cave like dungeon as he takes on the Dark Knight.

Sefton Hill, a game designer had this to say about Batman’s creepy foe: ‘It’s always a challenge to find someone who can truly challenge the Dark Knight in a man-a-mano fight. Solomon Grundy is someone who undoubtedly falls into that category.’ How you would stop someone who cannot truly be killed is something I’m looking forward to finding out when the game comes out in a couple of months.

In previous news we had provided you with a trailer that which gave you a first glimpse of Solomon Grundy and Penguin. It was after a battle with Penguin’s henchmen that Batman found himself blasted through the floor of Penguin’s Iceberg Lounge and hidden beneath was Grundy, nursery rhyme and all. You can see the concept art for yourself below, you can also check out this link where you can view the image full sized.

What do you think of Solomon Grundy as a villain? Are you impressed with the concept art and the details about the game that have been released so far? 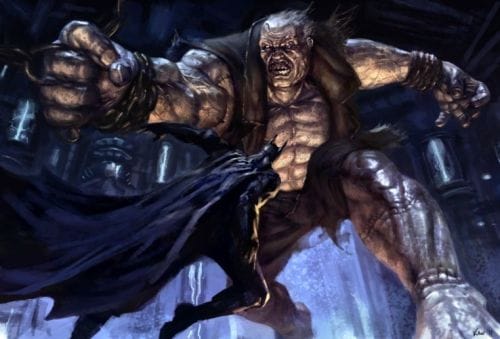