However, we’ve noticed something which we think you may find debatable. Balotelli is considered by most to be a world-class striker, but the same can also be said for new Chelsea FC player Diego Costa – with some even happy to concede that Costa is a far better player than Super Mario.

EA though disagrees. When taking a look at the stats between the two, you may be surprised to see that EA actually rates Balotelli higher than Diego Costa in terms of base stats.

Above is the confirmation from EA just hours ago that Balotelli is now available for LFC in FIFA 14 Ultimate Team packs. However, take a look at his card and then compare it to the Diego Costa Chelsea FC card as both players have the same 84 overall rating. 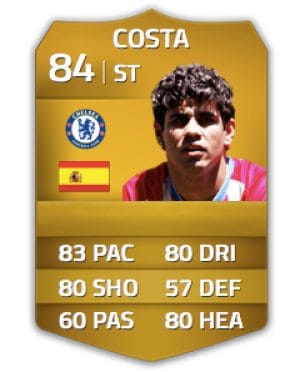 Specifically though, EA rates Balotelli better with an 82 for shooting compared to Costa’s 80 stat. Balotelli also has higher pace, dribble and passing stats than Costa.

Do you dispute EA’s assumption that Balotelli should have better stats than Diego Costa, or do you think it should be the opposite way around? Either way, it’s interesting to see if these stats will be changed when FIFA 15 ships this Autumn.