BackTrack or Revolution as it is better known has now been released, and has already tested the Motorola Atrix 4G & Xoom tablet device. The company had a little issue on their website the other day, but it was good news that this did not affect the release of this Linux distribution. We already know that this software has been built from the ground up, and as such sees a number of improvements over previous versions.

The H Security reports that there are now over 300 penetration-testing tools on Backtrack 5; these will allow users along with administrators to test a number of features on a range of devices. The range of tools is extensive, such as security checks for password crackers, vulnerability scanners sniffers and much more.

We mentioned above that the new software has already been used on the Motorola Atrix 4G and the Xoom, as it was used to test the functionality of the latest version of ARM. This was done by gaining access to Windows XP via Metasploit. For those who have been using BackTrack 4, then we have to advise you that all support for this has now ceased. 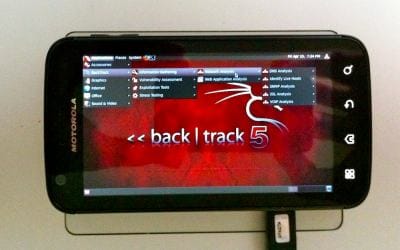 If you visit the BackTrack-Linux, then you will be able to keep up-to-date with all the latest bug fixes, updates and how to guides. Have you tried BackTrack 5 yet?