Great Scott! We have some exciting news for you gamers and movie lovers alike. The 80’s classic Back To The Future will be travelling to the PlayStation Network in game form in the not too distant future.

The game which was already released on the PC and Mac back in December last year, is set six months after the events in the third and final installment of the movie took place.

Gamers will take the role of Marty McFly and will once again have to travel through time to help his best friend ‘Doc’ Emmett Brown, this time back to 1931. With the help of young Emmett, you will need to examine objects while exploring 3D environments, collect useful items and solve puzzles in order to get further in the game. 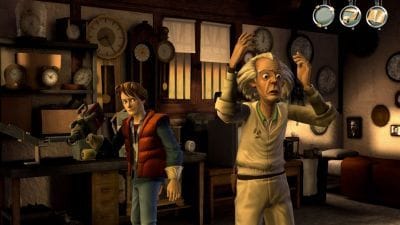 As of February 15th the game will be available to buy on PSN, spanning over five episodes, each episode being released monthly after purchase which will cost $19.99. Telltale games also plan a release for the Apple iPad soon.

Will you be purchasing the Back To The Future game? What do you think of it?