ThinkFun’s popular Solitaire Chess game has been a huge success among iOS users since it first released onto the Apple App Store, and now we’ve just heard that the Parents’ Choice Gold Award-winning iOS game has recently become available for Android users as well.

As Mary Ann Neder over on the appmodo.com website recently noted, the Solitaire Chess by ThinkFun app has been a top educational game for Apple iPhone, iPod Touch and iPad users since January 2011. The Solitaire Chess game is easy to learn, quick to play, and very addictive.

The great thing about the app is the fact that while you’re playing the game, you are also improving your strategic thinking skills. Solitaire Chess is easy for beginners to learn, and can be started without the user having any previous knowledge of how to play chess. 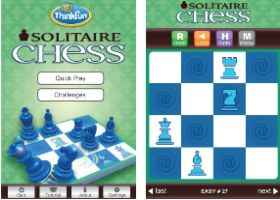 Solitaire Chess for Android has been designed and developed to work on all Android versions from Android 1.6 right up to 3.0 Honeycomb. The game features support for many of the latest Android tablets, including the Samsung Galaxy Tab 10.1, Motorola Xoom and the Asus Eee Pad.

The game does in fact come in both a free and full paid version. The free version features 40 challenges across 4 different levels of difficulty, while the full version comes with 400 challenges. Do you think you will download the Solitaire Chess by ThinkFun game?