If you are playing Avengers Alliance, we have some interesting news to tell you about. Avengers Alliance Spec Ops 18 is coming soon and we already know that the reward is Anti-Venom. However, we now have some additional details on the event and it looks like it may contain one or two other symbiote surprises as well.

We have had a major tease on some of the other characters that may be making an appearance in this Spec Ops. Anti-Venom is coming, which obviously means that the whole event is going to be based on the symbiotes.

As a result, expect a heavy influence from Spider-Man to play a part, as well as Agent Venom / Venom, who will certainly become a deploy hero that is needed to unlock the Epic Boss.

Now, take a look at the cryptic teaser that was unveiled by Playdom recently here. It reveals an upcoming threat, whilst hiding some of they key information such as who may be responsible.

We know that there will be a Avengers Alliance Spec Op 18 group boss and many players are already suggesting that it will be Carnage. Now, after putting some of the pieces of this puzzle together, it looks like many are united in suggesting that this SHIELD document is specifically related to Hybrid.

Hybrid aka Scott Washington is the character which you see above, which resembles Carnage but is a completely different character with different abilities. One of the key abilities is camoflage, allowing the character to go completely undetected and blend in with its environment – a possible infiltrator then?

If Anti-Venom is already the hero though and Carnage is the Group boss, then does that mean that Hybrid will be unlocked as a Spec Ops 18 lockbox reward? Or another way that Playdom could do it, is have Hybrid as the Group Boss and have Carnage as an unplayable Epic Boss instead, in the same mould as Winter Soldier.

We have included some clues that have already been solved below with the same document, giving you further proof that it is associated with Hybrid.

Feel free to give us your theories and possible ideas on how the Spec Ops 18 Symbiote event plot will work, with Spider-Man, Venom, Carnage, Anti-Venom and Hybrid. 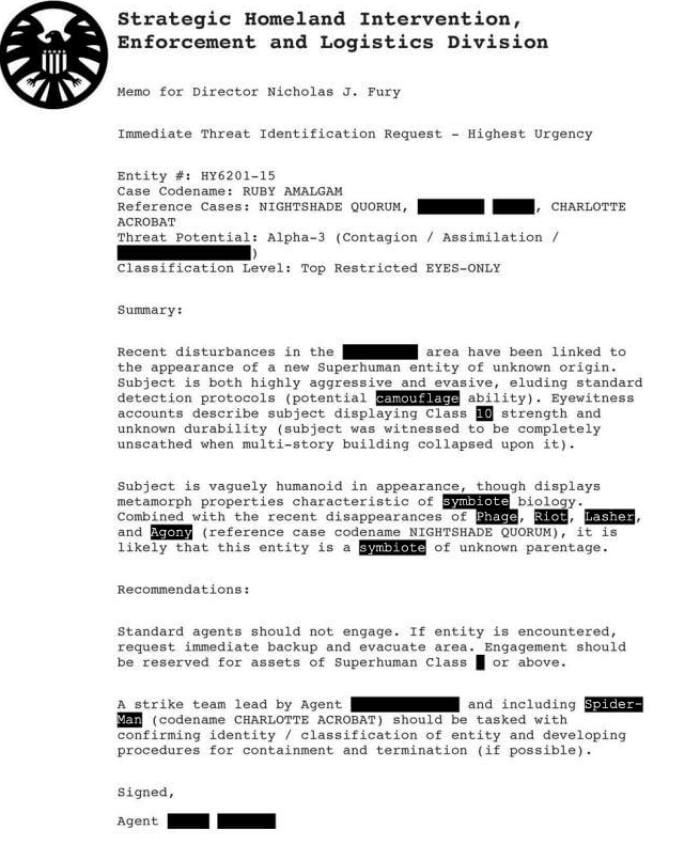