We have some details to share with you now, regarding the end of the Marvel Avengers Alliance PVP Alpha season that has just ended on Facebook. We’ve discovered that Playdom have once again made a big error, miscalculating the rating and not rewarding some players correctly to match that of their league finish.

The season has just ended minutes ago and as most of you will be aware, it’s a chance for Playdom to make active changes during the season in a new Alpha pre-season format, which will now go into Beta.

Unfortunately though, we can still see that there are problems. Look at our images here and you’ll see that Playdom has actually given players the same rating as to where they finished in the previous season – not accurate to the PVP Alpha that has just taken place. 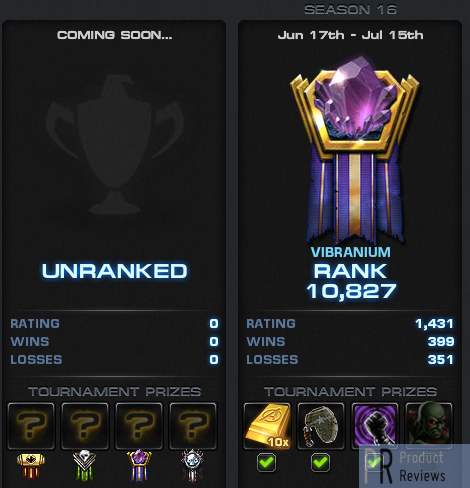 For example, a Vibranium finish has been recorded in the PVP 16 season with a rating of 1431. However, we just received Adamanium rewards for the PVP Alpha, but with the same exact rating which hasn’t been calculated properly.

This is going to be bad news for players who legitimately finished in Adamantium this season, but only reached say Diamond last season as you’ll end up with a Diamond rating for Alpha and could miss out on the proper rewards.

At the time of writing, there has been no word from the developers for the game on their Twitter account, but we have a feeling that players are not going to be happy with this again. In a season where changes were being made, it’s a step in the wrong direction – a shame as generally the PVP season went well overall.

Do you have a problem with your PVP pre-season Alpha rating? Get in touch with us below if so.