We have a quick heads-up to all Avengers Alliance players now, as it looks like a stealth update is on the way to the game, right in the midst of Spec Ops 16. Developers Playdom may be preparing to give all players another free weapon as part of the highly anticipated Avengers Alliance 2nd year anniversary celebrations.

For those of you that haven’t been playing for over a year, we can remind you that Playdom gave all players a free gift for the 1 year anniversary, that weapon being a Plasma Handgun Beam.

Fans are naturally eager to see if Playdom will repeat the pattern and we have intel suggesting that this may be the case. Information disclosed here suggests that an internal patch went live on Monday February 10, 2014, adding a new weapon to the game called the Pulse Blade.

We can even show you an image of the Pulse Blade below, which is already in circulation on various Marvel Avenger Alliance Facebook Groups.

The same source above has the information on what the Pulse Blade will do, it’s description is listed below:

Selective Protector – Protects allies from single-target attacks, does not protect against counter-classes
Rising Up – buffs the team up, same as standard skill
Heal – 10% heal when used while Agent is below 50% health
May also have Bastion (50% chance to reduce damage taken by 50%) – same skill as Thundra.

So there we have it. As far as we’re aware, this weapon is not in Avengers Alliance at the moment, but should be coming very soon.

Let us know what you think of the skills and if you think this is the MAA 2nd-year anniversary weapon, a 64-gold weapon or even the Diamond reward for Avengers Alliance PVP 14.

Update: The Pulse Blade is now out officially and actually it’s a weapon that can only be obtained via a Gold Sale. Below is the accurate stats for the weapon – looks pretty good, for a price! 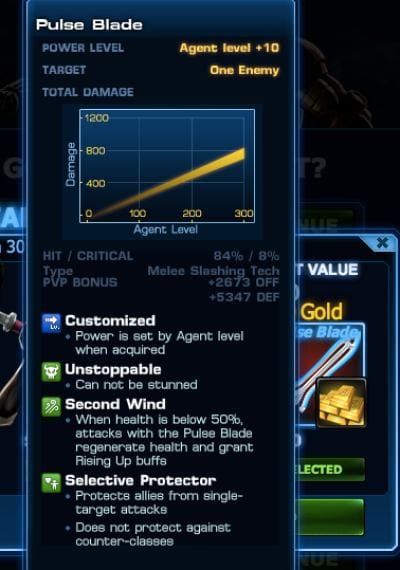