Playdom are once again hitting the headlines, for the wrong reasons. The developers of the immensely popular Avengers Alliance game have come under fire, for pulling the plug on their monthly PVP tournament due a bug, with just minutes to spare on the countdown.

The developers have become infamous for introducing new features to the game, whilst also managing to break another aspect of the game at the same time.

It happens time and time again and this time players are really frustrated. We would like to extend a helping hand to Playdom on this occasion, but unfortunately this is the same developer that refuses to acknowledge our messages to them about bug fixing.

Our messages are ignored each time without fail and it looks like most of you have had enough with the current state of the game.

Winning prizes in this PVP tournament requires a lot of effort. Players not only have to give up hours of their time to continuously fight battles, but they also have to contend with those who use hacks in the game to gain an unfair advantage.

We can tell you that Playdom knew about the bug involving Deadpool on Saturday, this is confirmed in a Tweet below by Mr Woods: 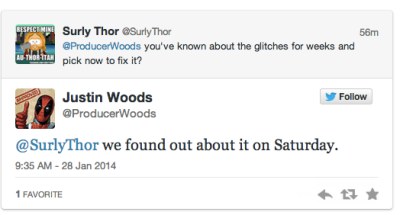 Despite that, Playdom decided to let their loyal players waste their time on Monday evening/Tuesday morning. With less than 10 minutes to go until the end of the tournament, the game went offline and a message appeared to say that the tournament had been extended by 7 days.

You won’t need us to tell you that common sense would have been to let players know a bit sooner. A message via the game’s official Facebook channel over the weekend would have done the trick – but they chose not to.

ProducerWoods has since left the following messages on his Twitter account and still refuses to acknowledge our requests for contact regarding re-selling broken premium weapons to consumers for $15.

I want to remind everyone tweeting isn't my job and I am inclined to close my account if people don't start being respectful.

Like I said earlier, I am glad to take feedback but I'm going to have to ban rude people. There is a polite way to communicate feelings.

What is your reaction to the way Playdom has handled the situation? Is this the worst thing that Playdom has done since you started playing the game?

UPDATE: It seems as if Producer Woods has deleted evidence admitting that the team knew about the problem on Saturday June 25, but still left it until the following Monday to end PVP at the last minute. Added screenshot for clarification.

UPDATE 2: A statement from Playdom reads below:

“We received your feedback regarding this decision and we understand that this caused a high amount of frustration. We have taken the necessary steps to resolve the issue that lead to this decision and we will be awarding all players the rewards associated with the League they had achieved on 1/27/2014 5:15pm PST if this League was higher than their final placement on 2/3/2014.”

What league were you placed in at that particular moment – can you remember? Let us know your thoughts on this change.