We recently told you that Nico Minoru would be the new hero for Spec Ops 15 on Avengers Alliance, the popular Marvel RPG on Facebook. Now though, it looks like a new character is coming in a lockbox as well – none other than Victor Von Doom himself, Dr Doom.

With the Thor 2 Spec Ops now over, attention has now shifted to the Avengers Alliance Spec Ops 15 release date. We know that Nico Minoru is the hero reward, but Dr Doom is a complete surprise and perhaps a very unlikely choice given the way the story mode is progressing at the moment.

Whispers online have revealed images showing the Impending lockbox, which will be green in color and obviously relate to lockboxes needed to unlock Dr Doom. To confirm this rumor further, just look at this Tweet that has been left by Avengers Alliance producer Justin Woods:

I heard you guys really like surprises. No need to refresh the game right now, but there are impending surprises.

If you click that Tweet and read through the comments, you’ll see that other Avengers Alliance players are also aware that the secret on Dr Doom appears to be out.

Now that we know he is coming, we wonder what moves he will have. Since he has been a boss in many missions, some of his moves could include the following – Mystical Ensnaring, Trifurcator, Arc Lightning, Steal Essence, Magic Bolt and Ring Imperial.

Perhaps Dr Doom will also have a multi-function ability as we have seen with many other characters recently such as Doctor Voodoo, Hank Pym and so on. For now, give us your reaction to Dr Doom and what moveset you want him to have.

UPDATE: Dr Doom has now appeared in game. Players will have to collect lockboxes by completing daily tasks, but the big surprise is that these boxes cannot be opened until Christmas day! Great move by Playdom we think for a change. Take a look at his moves and let us know what you think. Looks like we were right about the multi-function abilities. 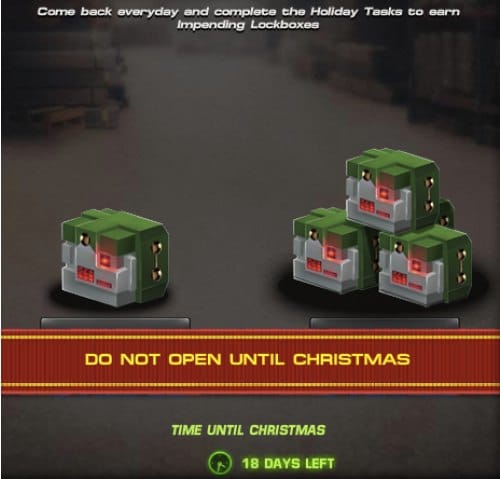