Although bugs continue to ruin the experience for many, Avengers Alliance is starting to get particularly exciting at the moment. It’s fan appreciation week for the popular Facebook game, and as a result – we now have a big update on some Avengers Alliance new heroes that could be coming soon.

If you have been playing the game, you’ll know that one big character request for months has been Iceman. Developers Playdom had initially resisted fan temptation, but now we can say it’s real – Iceman is confirmed for Avengers Alliance and will be the reward for Spec Ops 16.

While this is good news, it isn’t what we wanted to tell you about. With Iceman now confirmed, we couldn’t help but notice this rumored image that was doing the rounds a few weeks ago. At the time we were not sure if it was real, but now that Iceman has been confirmed with a very similar sprite – it could be real after all. 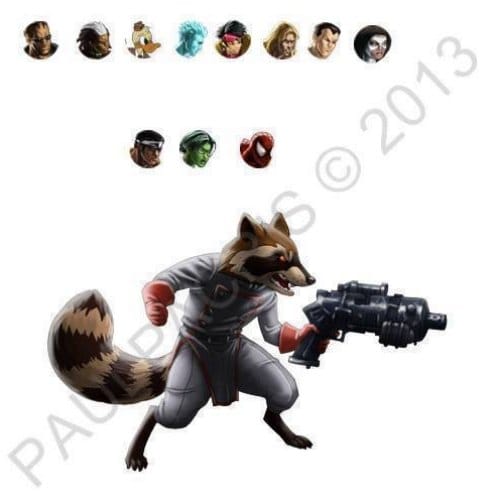 Take a good look at it, as it may be most of the Avengers Alliance new heroes in 2014. These could include the likes of Blade, Namor, Jubilee and Rocket Raccoon from the upcoming Guardians of the Galaxy movie. You can also see that new costumes could be on the way for Luke Cage, She-Hulk and Spiderman.

Obviously, we can’t confirm this as real yet but it is well worth keeping an eye on as the Avengers Alliance updates continue to come in 2014.

Unfortunately though, there’s still many bugs present in the game that Playdom refused to acknowledge. The producer for the game, Justin Woods has been busy on Twitter answering fan’s questions about all of the upcoming reveals.

When asked by us though about the broken GG Prototype premium weapon, which they sold to players for $15 with false-advertising – we had no response. It’s just one of many existing issues in the game which the developers seemingly intend to forget about as they focus on the gold-orientated PVP mode.

Guys I can never tell you release dates for things so please stop asking. I'll never ever answer those questions.

Are you happy that Iceman is on the way? Give us your thoughts on the other rumored heroes and also your opinion on the countless bugs that are still affecting the game.