Following on from the big news surrounding Consumer Reports’ verdict of AT&T being the ‘worst carrier in the US’ we have now heard a response from the carrier, who have offered up some figures of their own.

As reported from BGR, AT&T has offered up a counter report to the study by Consumer Reports, by saying that figures from the Better Business Bureau (BBB) has revealed that AT&T is actually the ‘best’ carrier in the US.

Although by best, they mean that AT&T is the least complained about carrier in the US, and they have provided a graph to back it up. According to AT&T, the other three main carriers in the US all had worse complaint stats than AT&T, during the last 12 months, ending December 3rd 2010.

Consumer reports readers may think that AT&T is the worst carrier in the US, but AT&T has immediately hit back by stating that Verizon had 34% more complaints, Sprint 117% more, and T-Mobile a whopping 207% more complaints than AT&T. 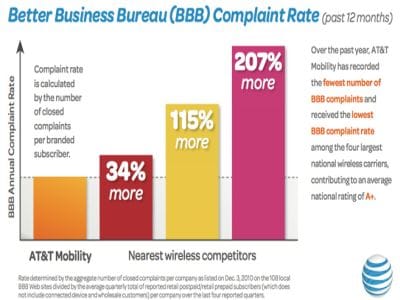 What are your thoughts on this? We previously asked you if you agreed with the Consumer Reports verdict, but do you have any else to add on this topic based on AT&T’s counter report? We’ll update you when we hear more news on this.

It seems everyone is taking a swipe at AT&T lately, check out this new T-Mobile MyTouch 4G Ad which we’ve uploaded below.